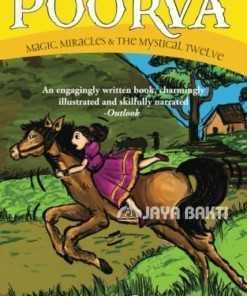 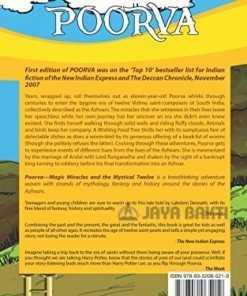 Wrapped up years roll themselves out as eleven-year-old Poorva whisks through centuries to enter the bygone era of twelve Vishnu devotees of South India, collectively described as the Azhvars. The miracles that she witnesses in their lives leave her speechless while her own journey has her bemused. She finds herself walking through solid walls and riding limpid clouds. Animals and birds offer her company. A Wishing Food Tree floors her with its sumptuous fare of delectable dishes as does a worm-bird by its generous offering of a beak-ful of worms! Cruising through these adventures Poorva gets to experience events of different hues from the lives of the Azhvars. She is mesmerized by the marriage of Andal with Lord Ranganatha and shaken up to see a bankrupt king turn to robbery before his final transformation into an Azhvar. Poorva-Magic Miracles and the Mystical Twelve is a breathtaking adventure woven around the stories of the Azhvars, using the strands of mythology, fantasy and history.

Be the first to review “Poorva : Magic, Miracles and the Mystical Twelve” Cancel reply

The Best of Sherlock Holmes (Set of 2 Books)